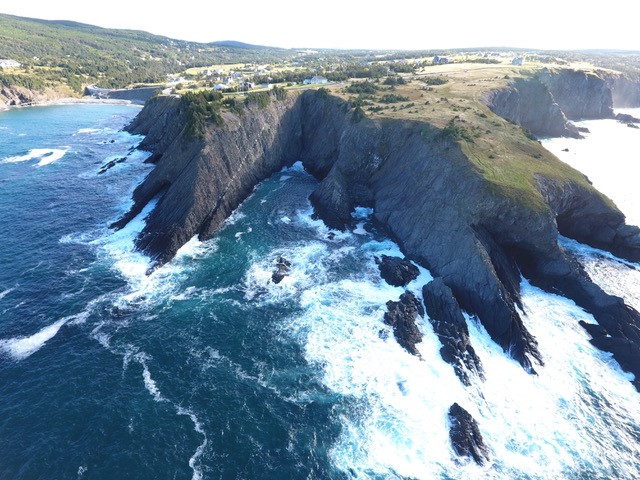 “The need for sustainable development was what drove me into local politics,” said Paul Ryan, who was first elected to the Town of Logy Bay-Middle Cove-Outer Cove a couple of years ago. Referred to locally as LBMCOC, the coastal Newfoundland town is a small rural community north of St. John’s, with the expansive Atlantic Ocean to its east. Several years prior to running for Council, Ryan became concerned with a new development being proposed that would require filling in marshes and building in a sensitive protected river area.  Fortunately, that project went nowhere, but Ryan realized the Town could benefit from being more proactive about managing development and becoming elected was a way to move that vision forward.

Ryan was born and raised in LBMCOC and even though he’s lived in every province from Ontario eastwards except for PEI, he returned back to his roots 20 years ago and has been there ever since. His home town is a tight-knit community of about 2,100 people and many families have been there for generations. Most people commute to St. John’s for work, an easy 15-minute drive away. Other than that, the local economy is driven by a spattering of dairy farms, a couple of auto repair shops, a convenience store, and an animal hospital. There’s a school, a church and still no gas station – an amenity that will likely become obsolete in any case as Canada works towards decarbonizing its economy.

The Town has grown rapidly in recent years with new sub-divisions that house mainly younger families. Development has been on hold since 2018 as the town works on a new Town Plan. A recent study of the Town’s water supply showed that it could sustain further development of one-acre lots, which is what residents who appreciate their rural lifestyle would like to see. Ryan is not opposed to development and would like to see the Town grow as envisioned by its residents, but he wants to ensure that growth is done sustainably, with land use practices that will not create lasting damage. There had been incidents of developers filling in marshes without permits and he was concerned that if these patterns continued, the community could become vulnerable to flooding and lose significant parts of its natural heritage.

LBMCOC is one of the few towns in this area of Newfoundland that maintains a rural atmosphere based on well and septic tank services. One of the first tasks Ryan set out for himself once elected to Council was to figure out how to protect the quality of life the residents have come to know, and that includes healthy wetlands and waterways, essential to a rural lifestyle. Through his own research, Ryan came across the innovative work of the Municipal Natural Assets Initiative (MNAI), a not-for-profit organization that supports municipalities in properly accounting for and valuing the services that natural assets like wetlands, forests and foreshores deliver to communities. Ryan immediately saw both the need and the potential for LBMCOC.

The Town didn’t yet have an inventory of its wetlands or other natural assets or a scientific analysis of the services they were providing to the community, like water purification and retention. Ryan wanted an evidence-based analysis that could be brought forward to developers and the community to show which municipal services are provided by natural assets, and why designated areas should be protected. The Town has embarked on a project with MNAI to build this knowledge and to develop a holistic asset management plan that covers municipal services delivered by engineered and natural assets.

The Town’s work on natural assets was just starting to launch when the opportunity to join the Atlantic Infrastructure Management (AIM) Network’s asset management cohort program came its way through an email to Council. AIM Network saw this as a great opportunity to work with a town that could integrate a natural asset inventory into the asset management process along with other built infrastructure. “Natural assets are a very important consideration in asset management planning. When they are recognized and incorporated into planning considerations, it can save a lot of money that might otherwise be spent on building new infrastructure, while also enhancing and protecting the natural environment,” said Daisy Foster, Managing Director of AIM Network.

The timing of the cohort program was perfect for the Town, as Council had hired its first-ever part-time town engineer, John Barry, just over a year before. Barry is semi-retired with more than 30 years of previous experience with the City of St. John’s. He had mentioned to Council that while the Town had been well-managed over the years, they would be well-advised to put in place a formal asset management plan that would tell them how much money they’ll need to invest in roads and other infrastructure improvements to set themselves up well to meet future needs. Barry left the City of St. John’s just as asset management was starting to take off, so he had a good foundation. Ryan suggested that Barry look into the program to find out whether it could provide the additional support needed to put LBMCOC on the right track.

Barry feels the program will provide much-needed guidance in getting their asset data organized. LBMCOC doesn’t have a large asset base. The Town owns and manages a town hall and a recreational facility, as well as 31 km of roads and some drainage and culverting systems for stormwater management. Residents use wells for their water supply and have independent septic systems. While they have some information about their assets and general condition and have done some mapping, they need a proper system to manage that information and still have some work to do to collect data on their buildings. Barry knows the town hall and facilities are aging and need upgrading, and Council also needs to understand the risks to infrastructure that come with a changing climate to ensure it can withstand the impacts. The work they’ll do in the cohort program will help put all of these pieces together so that Council has the information needed to make the right investments on a go forward basis.

Ryan is pleased the Town is strengthening its overall asset management system and natural asset management at the same time so that both natural and engineered infrastructure management will be well integrated. Council is unanimous in its support and sees the benefits. MNAI will be collaborating with AIM Network to ensure the natural asset inventory being developed is built right into the open source software that AIM Network supports, called AIMsoir. When asked if he felt LBMCOC was a leader in the province on this type of integration, Ryan suspected it is. As far as he knows, they are the only ones building natural asset management explicitly into their asset management practices so far. He presented their work at a conference last year and several people from communities with similar challenges approached him to learn how they could do the same.

Ryan is confident that the study being done with MNAI will provide the evidence base needed to protect significant natural assets and to ensure that development progresses sustainably. The town is starting with the inventory and valuation of the natural assets, but the full scope of work to protect assets through policy and to develop asset management plans to maintain them appropriately will be undertaken over several phases. Public consultations will be needed to build an understanding in the community about land use decisions that may affect private landowners. Ryan says the Town has done flood mapping and a ground water study that will help build a general understanding of how climate change is affecting the community. “At the end of the day, our work on asset management is about Council giving priority to the long-term protection of residents, their property, and the whole community.”

This article was originally published in the Summer 2020 issue of AIM Network News, the newsletter of the Atlantic Infrastructure Management Network.