Around the world, more and more people are moving from inland regions to live along a coastline. Many move for the coastal climate and weather, or for economic or recreational reasons. But studies show that as climate change heats up the earth’s temperature and melts glaciers, our oceans are expanding and sea levels are now rising almost twice as fast as they did over the past 100 years. As a result, by the end of the 21st century, millions of people around the world could be forced to relocate and communities could be faced with ongoing high costs to keep building dykes and seawalls as infrastructure fails.

To help address this threat, MNAI has launched the Managing Natural Assets to Coastal Resilience project. MNAI has already completed stormwater management projects with 11 communities in 3 provinces that developed a framework and modeling approach for incorporating natural capital in their municipal asset management. Now, this inaugural project will expand MNAI’s methodology so coastal communities can better understand, value and manage coastal assets that provide vital services such as wave and wind attenuation, soil stabilization and sediment capture, and water flow and flood regulation. The project is starting on a pilot basis with two coastal communities: the Town of Gibsons in B.C., and Pointe-du-Chêne, which is east of Moncton in the Southeast Regional Service Commission region of New Brunswick. 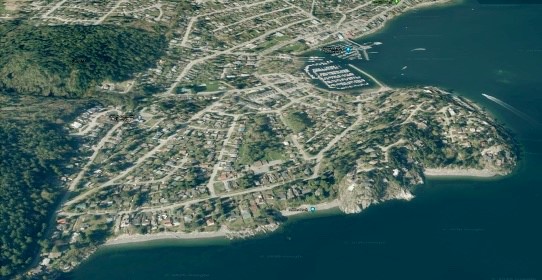 The coastal resilience project will help these two communities understand the value of their natural coastal assets and how these assets could protect them from floods, storm surge, and coastal erosion, and also hone the methodology so other communities across Canada can replicate and scale it up.

The two communities have already each participated in workshops where they’ve identified their main concerns, as well as their key natural assets that include salt marshes, estuaries, dunes, beaches, rocky shorelines, eelgrass beds.

The Southeast Regional Service Commission (SERSC) identified flooding and erosion as their area’s main risks. Pointe-du-Chêne has already experienced three major floods in the past 20 years and the dune areas have increased in height and have been pushed back. If nothing is done, SERSC recognizes they’ll lose three-quarters of their beaches and dunes and half of their marshes by the end of the century. “We’ve been grappling with the paradox of the coastal value and its vulnerability,” says Sébastien Doiron, Planning Director, SERSC. “The Coastal Resilience project will help us understand the value that nature plays in reducing the vulnerability of coastal climate change impacts.”

Gibsons, B.C., is also experiencing the impacts of a changed climate in the form of longer summer droughts, severe rain events and sea level rise, which are impacting properties and the sewer line. “While we are working hard to address those challenges via the implementation of structured asset management planning, land-use planning and resource management, we can benefit from more detailed information about the ecosystems services in our coastal areas, the condition of the natural assets that provide those services and information about how those assets will perform under various climate scenarios,” says Chief Administrative Officer Emanuel Machado, Town of Gibsons. “Adapting to climate change is a strategic priority of our local governments.”

The project results will put a financial value on the services provided by nature, which will help local governments determine what types of investments are needed and where, as well as help them integrate natural asset management into their overall planning and budgeting. The project will involve three phases of work over three years and will develop a replicable approach that other local governments can follow. And with oceans expected to rise between 26 to 77 centimeters (10 – 30 inches) by 2100, action can’t happen soon enough.